Ah, the wonders of the creative process...periods of intense activity followed by lots of contemplative time. This "down time" is a very important part of the process, and over the years I have come to appreciate that I can't rush this sub-conscious phase. It's a time of pondering challenges, thinking about technical issues, or just searching or even waiting for inspiration. I am definitely in the sub-conscious phase at the moment with respect to this stole. I have so appreciated all the comments and feedback so far. Lorian's comments about the "lines" of northern lights (short verticals creating a horizontal sweep) got me thinking about the challenges of interpreting these magnificent spectacles in fabric...and yes, even the audacity of trying to do so! Well, I'm over the feeling of "how dare I?" now (that didn't last very long--just a brief couple of hours in the middle of the night earlier this week--isn't that when any issue looms larger?) Now I'm into more practical contemplation of the technical challenges that may lie ahead. Meanwhile I've had to shift gears into high production to get ready for upcoming Christmas sales. I find that sewing, pressing, and knitting are great times for thinking through some other issues--while I'm stitching on something for the sales my mind is in neutral, a wonderful time for inspiration to strike. Next week I expect to play around with various materials and samples and I will post images here. Thanks especially to Anne for your support and enduring confidence!

For those of you in the Okanagan, come to the Artisan's Faire at the Vernon Lodge this Friday and Saturday. On Sunday, I'm setting up a booth at the Vernon Arts Centre in Polson Park and will be there for the month of December. I have some interesting jackets (which I call "cardi-shrugs" because they're like a shrug but also similar to a cardigan) and lots of handknit scarves for sale this year. I also have a few interesting felted and knit bags. 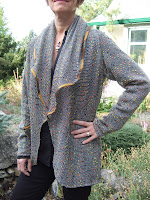 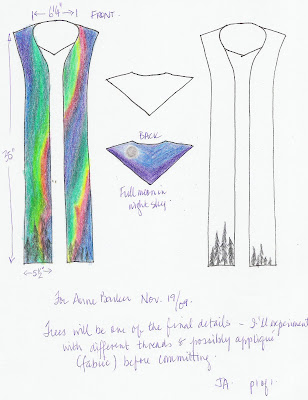 "in true Unitarian fashion" different parts of each design appealed to her. She liked the front aurora design of stole 1 and the back collar of stole 2 (especially the moon!) She liked the lighter and thinner trees on stole 3.
So, I've combined those elements into what you see here.
I will be using overlays of organzas to get the desired colours; this will make the fabric aurora shimmer and shine. As for the trees, I will decide that at the end. Some experimentation with appliqued fabric and thread will be in order.
Thanks for your feedback and comments. Glad to know I have some readers!
Posted by Janet Armstrong at 8:06 PM 4 comments:

Potential Designs for the Stole

In an earlier e-mail to Anne, I suggested she search for images with phrases such as "winter night sky" and "aspen trees in winter". She replied that when she did this, she realized that the northern lights really caught her eye. That really opens up the design possibilities. Northern lights have long fascinated me, but unfortunately I don't live far enough north to see them often. However, a few years back I experimented with layers of organzas and lots of stitching to see if I could re-create my own aurora borealis. Here's the result: 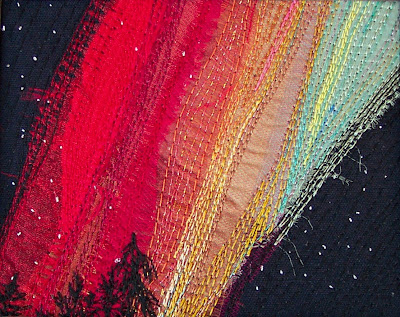 I sent this image to Anne, and she replied that my image was right on. They get some awesome northern lights in northern Alberta. So with that, I got out my coloured pencils and several photos of northern lights and went to work. I discovered in my research that green is the most common colour for aurora borealis and red is the most rare. Here are the sketches that Anne is pondering now. 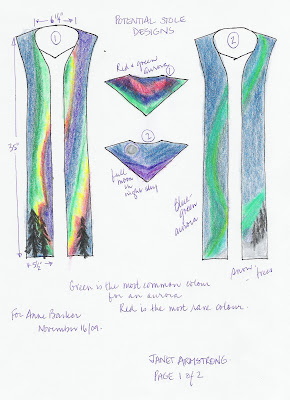 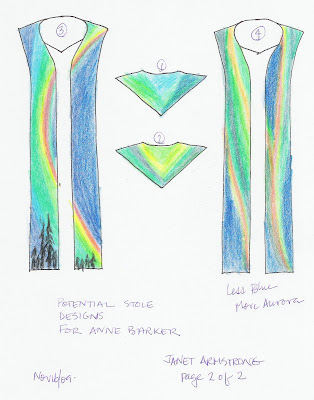 Which one do you prefer and why?
Posted by Janet Armstrong at 4:03 PM 5 comments:

A new stole in the making...

I'm excited about my next commission for a liturgical stole. This one is for Rev. Anne Barker who was installed on October 24, 2009 as minister of Westwood Unitarian Church in Edmonton. I suggested that neckties and scarves be collected from the congregation, and that perhaps these could be used somehow during the installation ceremony.
Here's Anne's description: "We collected the fabrics at the "Installation Service". In the written Order of Service, we called one section "the fabric of community" and Lorian explained that the collected scarves/ties would be used to create a stole that reflected the very fabric of our community ... and that it would be first worn at our Winter Solstice Service (Dec 21) at Edmonton's City Hall. During the 'charge to the minister', our religious educator read words from the children about "how to be a good minister" ... things like "try to be awesome!" ... while the children themselves draped and tied the scarves/ties all around/over me." And then on October 27th I received the package of scarves and ties in the mail, and spread them out on a table. There is a lot to work with in this collection! There are florals, geometrics, birds, music, rainbow colours--in fact, all colours are represented although there aren't a lot of brights.
In the conversation I had with Anne about her vision for the stole, the following ideas came up...Winter Solstice, cold, frozen, brilliant blue night sky with sparks of light, naked frozen trees, aspens with skinny empty branches...blues and purples....
Now to get to work on some designs... I plan to post my ideas on this blog so you can follow along!
Posted by Janet Armstrong at 8:28 PM No comments:

Two of my favourite activities

I spent last weekend in Kimberley teaching a couple of workshops, one knitting and the other sewing. This is the "contemplative knitting" group many of whom are very involved in the shawl ministry at the Kimberley United Church. Some exciting connections were made during the day with members of other congregations and neighbouring towns which fits with my philosophy of how we can knit our communties together!
I first taught "Purls of Wisdom--the Joys of Contemplative Knitting" at Naramata Centre with my friend and fellow fibre artist Margie from Edmonton in 2007. We were invited back in 2008 and are thrilled to be invited again August 8 - 14, 2010. The theme of the week is "network"--how perfectly the knitting of prayer shawls fits that theme!
The other workshop in Kimberley was for quilters--the morning was spent learning how to use the bias of neckties to advantage creating gentle curves. What better use for ties! I love to sew with neckties, especially when creating a liturgical stole. Most of the people in the group were familiar with the stoles I'd made for the minister of Kimberley United church, and this was an opportunity for them to see how I'd created the stoles. The afternoon was another favourite topic of mine--sewing with layers of sheer fabric, achieving a painterly effect--fooling the eyes into mixing colours.
Posted by Janet Armstrong at 3:42 PM No comments:

Janet Armstrong
Vernon, BC, Canada
I have about 50 projects (but who's counting?) in varying stages of completion, from baskets of yarn ripe with potential and simple projects like socks ready to grab at a moment's notice, to intricate garments that have been in process for a while and are almost finished! I love to design as I knit without too much advance planning. I also create liturgical stoles on commission from my favourite fabric, neckties! I balance my stitching life with volunteering at Hospice House and daily walks with a friend. Search Facebook for my Liturgical Art Stoles page for more info.